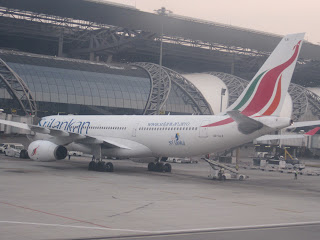 Sri Lankan Airlines has officially announced that it will be launching new nonstop flights to Melbourne, Australia effective 29OCT17 from its Colombo hub in order to tap into the large Tamil/Sinhalese diaspora residing over there which is the largest in the Oceania region.

Services will be operated on a daily basis using an A330-200 scheduled as follows:

In 2016, the P2P demand between CMB and MEL was 117,300 passengers which is high however a carrier which is largely dependent on VFR/leisure traffic should not launch a new long haul service as daily from the get go. In addition, connections via CMB to LHR are not available in both directions as only GCC/India connect conveniently.

This is a very high risk move being undertaken by UL as maximum 4 weekly nonstop services are required to begin with to build up the market. Also just because it offers a niche nonstop product, if carriers such as EK/SQ/MH/TG start dumping fares to lure passengers away (since its a price sensitive market segment), it will hurt UL more as they will be wholly dependent on P2P demand on this route whilst the others have diverse demand for various cities via their respective hubs.

In 2015, UL underwent a major cost cutting exercise in eliminating high loss making long haul routes in Europe such as FCO MXP FRA and CDG which was a sound business decision as the airline could not sustain it. Instead it chose to code share with QR via DOH to Europe/MENA which was the right commercial move.

Now with a similar new long haul route to be launched like MEL-CMB it is unfortunately very similar but much higher risk as FRA/CDG were not operated on a daily basis nonstop in the past + they had better two way connections via CMB to Asia for feeder purposes which MEL does not via CMB to Europe.

Posted by behramjee at 5:35 AM