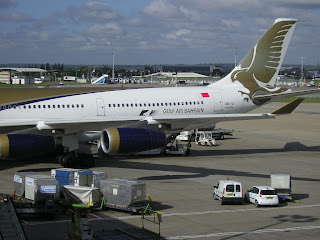 Virgin Atlantic has disclosed that it is actively studying a replacement aircraft that can single handedly replace its large wide bodied fleet of Airbus A340-600s and Boeing 747-400s. This is due to the fact that the airline is now doing a U Turn on its famous marketing premise "4 engines 4 Long Haul" because of high fuel costs associated with operating such type aircraft. Their CEO has stated that "the airline is rapidly moving out of four-engined aircraft - we have to do that because of where we seeing fuel costs going". Currently pending on order, VS has 6 A380s (deferred till 2017 and ordered in 2001) + 15 B789s (plus another 8 options) + 1 A333 (7 already delivered). Its high density fleet today consists of 18 A346s (308 seat configuration) + 13 B744s (367-455 seat configuration depending on 2 or 3 class layout) respectively. One condition of VS is that the delivery time frame of the replacement aircraft that it is studying has to be within the next 3-5 years in order to save on fuel related operational costs.

There are many options here for VS to consider, so lets look at them on an aircraft by aircraft basis:

1. The A351 (A350-1000X) EIS is now delayed as everyone is aware of plus it has had many cancellations due to its original design and performance threshold not meeting customer's expectations. This aircraft variant is expected to arrive in 2017 i.e. 5 years from now and for a new customer, earliest delivery slot would be in 2019 which is too late for VS as they want 2 engined long haul aircraft faster due to the soaring fuel costs as clearly mentioned in their press release. In addition, amongst the A350 family currently, this aircraft type is the least popular as only 62 have been ordered!

3. The A359 is too small to replace their B744 and A346 fleet however the B77W (B773ER) is the best bet as if ordered this winter, it can be delivered from 2015 onwards gradually. Its high density 2 class configuration for its leisure flights out of LGW and MAN are ideal as well as its 3 class capacity carrying capability out of LHR. VS's Aussie franchise VA already has experience with the B77W so they can be a lot of expertise and cross synergies gained/transferred over by ordering the B77W as a pure B744/A346 replacement.

4. In addition, Boeing can also help structure a deal where by VS becomes one of its launch customers for the newly proposed B777-900X which has an EIS of 2021. This can be done by Boeing placing with VS as a " stop gap bridging solution" 30+ new B77Ws (delivery from 2015 onwards) in exchange for a similar sized launch order for the B779X. Once the B779Xs get delivered frame by frame to VS, they will return back to Boeing the B77Ws which can be sold or leased to another carrier as in 2021-22 these aircraft would still have good resale value as they would be only 6-7 years old. The B779X aircraft type is expected to yield a 21% improvement in per-seat fuel burn and a 16% improvement a cash operating cost per-seat over today's B77W hence if proven true it is a a win-win deal for both parties. VS can too take advantage of many launch customer financial discounts that Boeing provides to airlines who are launch customers.

5. As far as its A380 order (6 frames) is concerned, it was placed in 2001 and since 2004 been regularly deferred till 2017. One does feel that the A380 is now not a good fit for VS but all is not lost, as Airbus can easily offer them an exchange i.e. 1.5 or 2 A333s for each A380 ordered. In turn, this would result in VS gaining an additional 12-15 A333s in its fleet which is more suited for its worldwide network as the carrier relies more on frequency rather than capacity. With the A333IGW now available, this aircraft can easily fly nonstop from LHR to SFO/YVR/LAX/DEL so a benefit indeed for VS. The A333IGW is also capable enough and perfectly sized to launch planned new nonstop routes in 2013/14 which are BLR, IAH, GRU and GIG. FYI, VS's current A333s seat 266 passengers in a 3 class configuration.


Fly Dubai of the UAE has officially announced that it will be embarking on a major network expansion during the upcoming IATA W12 season across Europe, the GCC and MENA regions in the following manner:

SAH - frequencies increased from 4 to 6 weekly

BSR - frequencies increased from 3 to 4 weekly

OTP - frequencies increased from 3 to 4 weekly

FRU - frequencies increased from 2 to 3 times per week


Singapore Airlines has officially announced that it has placed a multi billion dollar order with Airbus towards a purchase of 25 additional wide bodied aircraft designed for expansion and replacement of some of its current fleet. The total order worth is US$ 7.5 billion and consists of 5 Airbus A380s + 20 more A350-900s. In addition, SQ too confirmed that due to soaring fuel prices and changed market dynamics, it shall be suspending two of the world's longest nonstop flights from its SIN hub to EWR-Newark and LAX respectively which are currently operated on a daily basis using an Airbus A340-500. Both these routes will see their nonstop flights grounded effective 27OCT 2013 and in exchange for this mega order, Airbus has agreed to take back SQs entire fleet for A345s.

With regards to the 20 B787-900s that SQ has on order with Boeing, it has now revealed that all of these aircraft shall be transferred to its long haul low cost subsidiary i.e. Scoot and also it wont be for the -900 version. Instead, SQ is working with Boeing in having a mixed fleet of the smallest B787-800s and the largest B787-1000s in its fleet in order to adequately serve markets depending on their individual demand characteristics.

Interesting barter deal exchange done by Airbus with SQ with regards to taking back their A345s. This is similar to what Boeing did with SQ in the early part of the previous decade when it bought SQs A343s in exchange for a large B777 order from the airline. Other airlines plagued with operating A345s such as TG and EY must be surely licking their lips now knowing what can be possible in the future with their own small fleet of A345s when negotiating an Airbus order.


Qatar Airways has officially revealed that it shall be launching new flights to Phnom Penh, Cambodia effective 20FEB 2013 as the carrier looks to take advantage of the rapidly growing tourism traffic originating from Europe into this country. QR shall operate a daily 259 seater A330-200 to PNH via SGN (Ho Chi Minh City) with three flights departing DOH at 0115 and the remaining 4 at 0730. The routing shall be DOH-SGN-PNH-SGN-DOH with 5th freedom traffic rights available on SGN-PNH-SGN. QR also announced that its current services to CGK-Jakarta, Indonesia shall be increased effective 09FEB 2013 as the carrier will be adding an additional 11th weekly nonstop flight on this route using an A332.

Lastly, QR's CEO has officially disclosed that in 2013, QR shall be launching 16 new destinations of which in USA there shall be 4 i.e. Chicago (already announced) along with Detroit, Boston and Atlanta. The latter 3 are expected to be operated with the B787-800s.

Very surprising to see ATL on this list and not MIA/DFW especially since there is no hint of any relationship developing with Delta. Both MIA and DFW offer much larger O&D market sizes to GCC, Indian Subcontinent and Africa versus ATL + better connection possibilities with both airports being core AA hubs. BOS shall do well for QR as it has a code share deal with B6 that has a hub out of BOS + AA too maintains a decently sized hub base there.


Lufthansa has officially announced that it will be launching new services out of its Munich hub to YVR-Vancouver, Canada effective 16MAY 2013 as the carrier looks to seriously hamper Air Berlin's DUS-YVR summer seasonal service. LH shall be operating MUC-YVR nonstop on a daily basis using an Airbus A 330-300 with the below mentioned schedule:


Air Berlin of Germany has officially disclosed that it will be launching new services out of its BER hub to ORD-Chicago, USA effective 01MAY 2013 as the carrier looks to build on its strong partnership with One World partner carrier i.e. American Airlines. AB will be operating this route nonstop using an A330-200 on a 5 weekly basis with the below mentioned schedule:

AB will be code sharing with both AA and EY on this new service!


Air France has officially announced that it shall be launching new services to Kuala Lumpur, Malaysia effective 22APR 2013 after suspending the route 18 years earlier in 1995 ! AF will fly 3 times per week nonstop using a Boeing 777-200ER with the below mentioned schedule:

In addition, AF too disclosed many new changes to medium and long haul network for the IATA Summer 2013 season of which the main highlights are as follows:

CAN - frequencies increased from 5 weekly to daily using a B772ER


Turkish Airlines has officially disclosed that it has placed a large follow up order for 20 Boeing 777-300ERs with Boeing earlier on this week as the carrier looks to rapidly expand its long haul network along with frequencies on certain key routes especially those that are STAR hub airports. The order consists of 15 firm + 5 options with deliveries starting from 2014 onwards. Last week, TK placed an order for 10 additional A333s and now with this new order, it would bring its total B77W fleet size to 27 aircraft. TK too announced that due to poor response from its customers, it shall be getting rid of its Premium Economy cabin product which is currently on board its B77W fleet only. Its B77W fleet new configuration once the Y+ cabin is taken out, is expected to be 28J + 354Y class seating a total of 392 passengers for the existing batch of B77Ws in its portfolio. The newly ordered B77Ws that will be delivered from 2014 onwards are expected to have a new business class product seating 36J + 300Y class passengers to be used on the premium heavy routes of JFK, China, NRT, HKG, LHR and


American Airlines has officially announced that it will be embarking on a major long haul expansion of its network from the on set of the IATA S13 timetable with the launch of 4 new routes from its primary hub airports of JFK, ORD and DFW. The main highlights are as follows:

Good choice of launching ORD-DUS as AA is very weak in Germany and now with AB in One World, this new route should help elevate its market foot print in Germany and Eastern Europe. DFW-ICN is an interesting choice given that KE already operate this sector nonstop. If the B787-900 or B 777-300ER can operate DFW-PEK/PVG nonstop without any payload limitations in either directions, then either route should be seriously considered for the future as there is a lot of potential to be exploited here.


Ethiopian Airlines has disclosed that it will be initiating some capacity increases across its long haul route network effective NOV 2012 onwards as the carrier fully integrates the B787-800 into its core flying fleet. The main highlights are as follows: