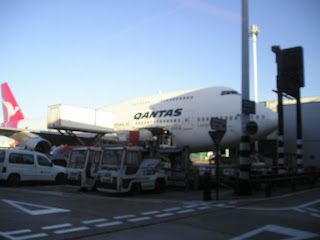 A new landmark bilateral deal has been signed this week between the UAE and Philippines further opening up both markets to be exploited especially by the 2 dominant UAE carriers. The main highlights of this new agreement is as follows:

Both PAL and Cebu Pacific are the designated carriers from the Philippines and have already officially confirmed their intentions to launch nonstop MNL-UAE flights from W13 using their newly ordered A333IGWs.


Thai Airways has officially revealed many capacity changes for its medium and long haul route network for the upcoming IATA W12 season of which the main highlights are as follows:

MUC - capacity reduced from daily B744 to daily B773ER


Emirates has officially announced that it shall be launching new nonstop flights to ALG-Algiers, Algeria effective 01MAR 2013 as the carrier looks to further increase its presence in the high yielding African markets and connect Chinese, Japanese and Korean traders in particular with convenient one stop flight options via its Dubai hub to all corners of the largely un-tapped continent. EK will be operating a daily Airbus A 330-200 on the DXB-ALH sector departing DXB at 0845 and arriving back by 0055 the next day. The top markets on the ALG route relevant for EK are DOH, DXB, PEK, JED, MED, AMM, BEY, MCT, MNL and CGK respectively. In addition, EK also announced the following capacity increases for its IATA W12 schedule:

SEZ - frequencies increased from 11 to 13 weekly

AMM - frequencies increased to double daily flights using a B777


Qantas Airways has officially announced that it has signed a landmark 10 year commercial alliance agreement with its former arch-rival i.e. Emirates that will come into effect 31MAR 2013 i.e. on set of the IATA S13 season.

The main highlights of this alliance are as follows:


Philippine Airlines CEO officially announced last week plans for its Toronto bound flights as well as a reallocation of its Vancouver capacity from the upcoming IATA W12 season onwards. The main highlights were as follows:

In addition, PAL placed its largest ever order on record for 54 Airbus aircraft that will be the cornerstone of its short and medium haul fleet for the next 15 years. The breakdown of this US$ 7 billion order was as follows:


Cathay Pacific has officially announced that it shall be launching new nonstop flights to HYD-Hyderabad, India effective 01DEC 2012. CX will be operating 4 weekly flights using an Airbus A 330-300 and shall be targeting traffic bound to China, Japan, LAX, SYD, MEL, SFO, ICN and TPE primarily. The flight schedule is as follows:


Qatar Airways has officially announced that it will be launching new nonstop flights to ORD-Chicago effective 10APR 2012. Daily services will be launched from the get go using a Boeing 777-300ER. The flight schedule is as follows:

In addition, QR further revealed more changes to its IATA W12 schedule of which the main highlights are as follows:


Egypt Air has officially announced that it shall be re-launching services to KIX-Osaka, Japan effective 01DEC 2012 as the carrier looks to regain its presence in markets it had suspended in 2011 due to the political unrest in the country. MS will operate twice weekly nonstop flights from its CAI hub using an Airbus A340-200. The flight schedule is as follows:


Qantas of Australia has officially announced that due to its heavy losses incurred in 2011 on its international routes solely totaling US$ 450 million it has canceled a previously confirmed order for 35 new Boeing 787-900s with the American manufacturer. Boeing and Qantas have a long business relationship and both sides agreed to help each other out during a time of crisis as Boeing too requires B789 slots being freed for current clients due to the aircraft sales popularity versus the -800 version.
Posted by behramjee at 11:23 AM