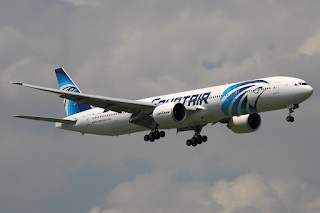 Egypt Air has officially announced that it has placed an order with Bombardier at the Dubai Air show today for 24 C Series 300 aircraft.

The breakdown is 12 firm plus 12 options and shall be initially used to fully replace its Egypt Air Express fleet of 10 E70s.

The realistic flying range capability of the C300 out of CAI airport during summer season can be seen on the map below:

*Eastbound it can fly nonstop up to Karachi

*Westbound nonstop up to Manchester or Lisbon

*Southbound nonstop up to Accra, Dar Es Salaam and Kinshasa

The B789 will be used to expand its long haul inter-continental network with flights to Washington DC from Cairo expected to be launched as the first new route operated by this aircraft type.

The realistic flying range capability of the B789 with a full payload of 290 pax approximately out of CAI airport in summer season is mentioned below:

* Official published range of B789 penalized by -25%
* For Cairo-Houston, there will be a payload restriction
* No payload issues for any Southeast Asian route + Sao Paulo
* Aircraft cannot operate from CAI to Australia nonstop

Posted by behramjee at 2:40 PM No comments:

Ethiopian Airlines has officially announced at the on going Dubai air show that they have placed an additional order for 4 Boeing 777-200LR freighters.

ET currently has 6 B77Fs in its fleet and these incremental 4 will be used to expand its freighter network as per the CEO.
Posted by behramjee at 3:19 AM No comments:

Emirates has officially announced that it has placed an order for 40 Boeing 787-10s worth US$15 billion at list prices. These are the largest variant currently available on the Boeing 787 family line.

The other airlines that have placed an order for the B781 version are as follows:

For some time now, EK has realized that their fleet strategy of it being revolved around the B77W and A380 only was not working as the B77W was for logical reasons too big of an aircraft to be considered its smallest type. Though EK has a fleet of 10 B777-200LRs which are actually its smallest aircraft, it is used on dedicated ultra long haul routes primarily where the B77W cannot operate to.

The B781 is similar in size to the A333 and B772 but has better operating economics due to its more modern technology. In fact compared to the B77W, Boeing has officially stated in its EK B781 order press release, that the fuel consumption savings alone for the B781 is 25% less per flight!

As far as the placement of this order is concerned, there are positives and negatives. The positives are as follows:

1. EK desperately needed a smaller aircraft in the 250-330 seat range which they lost out on since the retirement of their A332s over a year ago.

2. The B781 is an ideal medium density aircraft for regional operations to the Indian subcontinent, Africa and Europe plus can cover all of EK's Southeast Asia network easily with a full payload of pax + cargo. The realistic maximum flying range capability out of DXB airport for this aircraft type is 10 hours 30 minutes.

3. Mega operational cost savings to be incurred over the long run by deploying this aircraft variant instead of the B77W on routes where the latter is deemed too big.

5. The usefulness of having a 330 seater B781 for EK can also be looked at in a manner on which they operate on certain sectors where they are limited in terms of seating capacity per week. For example, on DXB-HYD if EK is limited to fly 7,945 seats per week, they currently do so by flying triple daily B77Ws. If they switched over to B781s exclusively, they can increase frequency by operating 24 flights per week using a 2 class 330 seater version or 27 flights per week using a 3 class version compared to 21 on a B777-300ER!

The negatives are as follows:

1. The realistic flying range capability of the B787-10 out of DXB airport during summer season is mentioned below with the brightly colored area being reachable whilst the dark shaded area being untenable.

2. As you can make out from the range map below, the B781 can on a normal day during the IATA summer season fly a maximum of 9,500 km nonstop from DXB airport which means it cannot operate to any North American/South American and Australian destination nonstop with a full payload with the exception of Perth but on the return PER-DXB there will be a payload penalty in place.

3. By not ordering the longer range B789 which can cover the U.S. East Coast + PER, it does not provide EK with the scheduling + cost saving flexibility to downgrade flights during the low season period between FEB-MAY + OCT-NOV. For example, a B789 operated DXB-BOS-DXB round trip flight at a total net cost level would cost EK approximately US$112,000 less versus using a B77W. This same sensible approach has been adopted by Qatar Airways who downgraded many U.S. East Coast flights due to seasonal demand fluctuations from a B777 to a B788/A359.

4. EK actually needed a 280-290 seater aircraft to be their smallest wide body and not a 330 seater B781. In this way the fleet layout would have looked more reasonable as follows:

The above is a much more commercially acceptable aircraft capacity distribution.

5. New USA routes requiring a 250-300 seater sized aircraft such as PHL and DTW cannot be operated with a B781

To conclude, this order was very much needed by both Boeing and Emirates as it helps increase for the former especially the residual value and credit-ability of the B781. It gives EK good positive PR in USA with the Trump Administration in particular as the order is worth US$15 billion and will stimulate new local jobs for sure.

Hopefully down the road, EK management decide on converting at least 10 of the B781s to 12 B789s as it will really help them all round over the long run. Plus it can enable them sensibly to launch new routes such as DTW and PHL with a smaller B789 versus a more expensive B77W.
Posted by behramjee at 3:07 PM No comments: