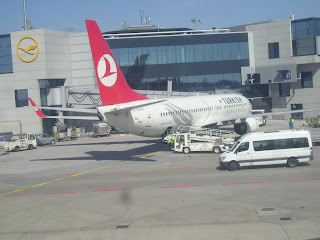 PAL-Philippine Airlines has officially announced that it shall be launching new flights to New Delhi, from March 27th 2011. PAL operate a 6 times weekly service between its Manila hub and Delhi using an Airbus A 330-300 for all the flights. The flight routing though would be 3 weekly nonstop terminator flights and the remaining 3 flown via Bangkok with full 5th freedom rights.

Thai Airways has officially confirmed that due to high demand for its flights to Oslo, Norway on a year round basis, it will be increasing frequencies on the BKK-OSL route from March 27th 2011 onwards. Frequencies shall be upgraded from the scheduled 5 weekly nonstop services to a daily operation using a Boeing 777-200ER (292 seater) for all the flights.


United Airlines has officially announced that it will be launching new flights to LOS-Lagos, Nigeria from its IAD-Washington DC hub base effective Dec 12th 2010. UA shall be operating a daily flight on this sector via Accra using a 185 seater Boeing 767-300ER. However, it is expected that with the tag on service, capacity is expected to be increased to a Boeing 777-200ER by Summer 2011.

In addition Air China also officially confirmed that it has placed an order with Airbus for 10 A 359s plus 10 Airbus A 332s. The A 359s will be used to gradually replace its entire Boeing 777-200 fleet.

Air Asia X has officially confirmed that it will be launching new nonstop flights from its KUL hub to ORY-Paris Orly airport effective Feb 14th 2011. Flights shall be operated 4 times per week nonstop using a 2 class configured Airbus A 340-300.


KLM has officially confirmed that it will be dry leasing into its fleet 3 brand new Airbus A 330-300s meant primarily for expansion along with purchasing 5 new Embraer E190s. The A 333s will be delivered to the carrier in 2012 which will be replacing B 772ERs on trans-atlantic flights which in turn will be freed up to expand further in Far East Asia and Latin America.


RAK Airways of UAE has officially announced that they will be launching new flights to Bangladesh from Dec 15th 2010. Three weekly flights each shall be operated nonstop from its RAK-Ras Al Khaimah home base using a Boeing 737-400 to both Dhaka and Chittagong. The flights are primarily targeting O&D traffic + 6th freedom transit traffic bound to JED.


Turkish Airlines has officially confirmed that it shall be further increasing capacity to ALA-Almaty, Kazakhastan from the on set of the IATA Summer 2011 season. The new plan calls for all IST-ALA daily flights to be operated with A 333s rather than 3 weekly B 738s + 4 weekly A 333s. The primary reason for this major capacity upgrade is due to high demand in the business class cabin + cargo.

Posted by behramjee at 2:24 AM