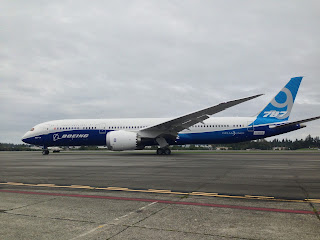 Canada's second largest airline i.e. WestJet today placed its largest ever commercially valued order with Boeing for 20 wide body aircraft as the airline has decided to aggressively go forward with this project.

In my March 2016 newsletter, I had written the following as at that time WS released their intentions of studying long haul expansion.

In my opinion, if WS is really serious about the long term investment it needs to make for its wide body jet operations then it should adopt the below mentioned strategy:

1. Purchase 10 jets to realize synergies and obtain a decent discounted offer from either Boeing or Airbus

2. Base 5 jets out of YYZ and YVR respectively for Asia (YVR base) and Europe (YYZ) operations

3. It would be best to buy a modern aircraft with the latest flight avionics hence opt for the B789 as its future re-sale value + on board seating capacity is better suited for WS rather than the larger A359.

4. The B789 should be easily capable of having 361 seats on board in a dual class configuration (28 premium economy 2-3-2 + 333 economy) offering very good operating costs per seat unit on flights under 10 hours of flying time even if price of oil increases to $60-70 per barrel.

6. In the winter season when volume based demand from YYZ to Europe evaporates the aircraft based out of YYZ should be operating to London + selected U.S. , Caribbean destinations only such as Barbados, HNL, LAS, LAX and Florida. Or in order to take advantage of the "Chinese new year season + winter holidays" (between DEC-FEB), it can re-allocate 2 of the YYZ based aircraft to YVR to boost YVR-Asia frequencies.

7. For the YVR long haul hub to be effective, WS first must have a strong bank of U.S. bound flights to generate transfer traffic volume to feed YVR-Asia.

8. WS needs to have strong interline / code sharing agreements in Asia and Europe especially LGW in order to get incremental revenue generating opportunities.

Posted by behramjee at 7:37 AM