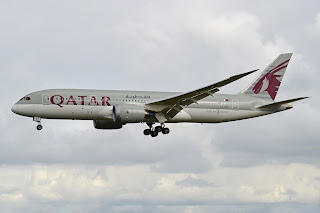 Qatar Airways has officially announced mega expansion plans to its route network for 2017-18 as the carrier revealed today 8 new destinations that it intends to launch. They are as follows for 2017 and 2018:
Dublin, Las Vegas, Medan, Rio De Janerio, Santiago, Yanbu, Canberra and Tabuk
http://www.qatarairways.com/ca/en/press-release.page?pr_id=pressrelease_2017destinations
Comments:
Out of the above mentioned destinations on the long haul side of things, the only ones that have a remote chance of succeeding from a seat factor point of view are Medan and Dublin.
Canberra market demand is extremely small to Europe/GCC and it will really struggle. The only way to get decent loads from here is to ensure that it’s a one stop service operated via KUL or BKK. Preferably, KUL should be chosen so that MH can code share on the route being a fellow OW carrier thus providing it with useful feed via KUL to other key Asian cities.
Few EU carriers have already announced pulling out of GIG and with the Brazilian economy still in tatters it is surprising to see QR take this initiative. The most promising new destination in Latin America in 2016 has been Bogota (BOG) and that is a route that needs to be looked at as demand is there from China, SE Asia, DXB and Europe. BOG’s altitude would not enable a nonstop flight to be operated from GCC hence it is better to fly via Europe (preferably Rome or Spain) and take advantage of 5th freedom traffic potential. The below demand has been witnessed for the past 12 months on key trans-atlantic cities to/from BOG:
FCO – 24,000 (nobody flies nonstop)
BCN – 72,000
MAD – 153,000

Posted by behramjee at 8:27 AM