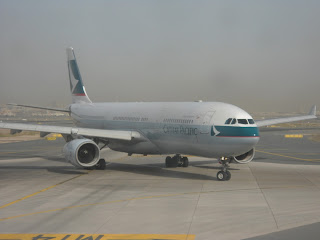 Cathay Pacific has officially announced that it shall be launching 2 new routes i.e. one medium haul and one long haul to further expand its global network catering to markets that are in particular seeing ever growing demand from mainland China. The new medium haul route announced is MLE-Male in the Maldives which shall be launched effective 27OCT13 operated 4 times per week nonstop using an A333. MLE over the past year has seen over 200,000 tourists arriving from mainland China alone and the market demand for this destination is also rapidly growing from South Korea, Hong Kong and Japan alike. CX's MLE announcement of MLE comes on the back of its main HKG based competitor i.e. Hong Kong Airlines also announcing that its own MLE services have been reinstated 4 times per week since July.

With regards to the new long haul route, CX announced EWR-Newark in USA which shall be flown on a daily basis nonstop using a 2 class configured Boeing 777-300ER. In turn, this will make CX service the New York area market with 5 daily flights i.e. daily EWR + daily HKG-YVR-JFK + 3 daily HKG-JFK nonstop all operated with B773ERs. CX also revealed some other long haul capacity changes to its network for the upcoming IATA W13 season of which the main highlights are as follows:


Air Canada has officially announced that it has adjusted its original order with Boeing for 37 Boeing 787-800s to be divided between both the -800 and the more popular larger -900 models. The new breakdown is 22 B789s + 15 B788s. The B789s provide the airline with the right capacity to perfectly replace its A333s on European services as well as replace the B763ER in the future on certain YVR-Asia flights. The attractive economics of this aircraft type also give the option to AC in allowing it to open new long haul routes from Canada that do not require the additional capacity of the B773ER such as Montreal-Beijing and Montreal-Casablanca in particular.


Emirates has officially announced many changes to its IATA W13 schedule of which the main highlights are as follows:


Qatar Airways has officially revealed few capacity changes to its medium haul route network of which the main highlights are as follows:


Malaysia Airlines has officially announced that it will be increasing its presence in Austral-Asia during the upcoming IATA W13 season as the carrier looks to take advantage of the growing O&D + transfer traffic demand from these markets and focus its expansion primarily within a 7-8 hour flying radius of its main KUL hub. The main highlights are as follows:


Turkish Airlines has officially announced that it will be launching new nonstop flights to BOS-Boston, USA effective 12MAY14. Flights shall be operated on a daily basis from IST using an A330-200 offering excellent connections in both directions to Middle East, Africa and Indian Subcontinent. TK will henceforth become the first airline from the Middle East region to operate into BOS. In addition to BOS, TK too revealed that it will be launching 2 new African destinations from 12DEC13 onwards i.e. Kano-Nigeria and N'Djamena which will be operated 4 times per week using a B737-800 in a triangular routing manner.

With regards to its fleet, TK confirmed that it has placed an order for 3 additional A333s + 5 additional B773ERs as the carrier is betting heavily for its long haul route network to grow rapidly over the next three years. Some of the A333s by 2015 will be replacing the A321s on selected flights to mainland European airports which have slot restrictions.


United Airlines has revealed that due to lower demand stemming from the U.S. forces pull out from Iraq in particular, it has seen reduced demand for its services to Kuwait and Bahrain in particular and as a result has decided to reduce its presence in these two markets from September onwards. Currently, UAL operates a daily IAD-KWI-BAH service using a B772ER. These shall be reduced to 4 times per week only using the same aircraft type.


Egypt Air has disclosed that it will be launching new services to CGK-Jakarta, Indonesia effective 02DEC13 as the carrier looks to take advantage of its CAI geographical hub location to tap into the growing Indonesia-Saudi Arabia and Europe bound market segments. GA revealed that the new flights shall be operated 4 times per week via Kuala Lumpur using an A330-200 and as a result of which the daily CAI-BKK-KUL service using an A333 shall terminate in BKK itself. Other changes for the W13 season revealed by MS are as follows: