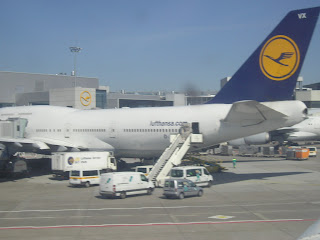 
Lufthansa has officially announced that they have placed the largest ever order by a legacy European airline (in terms of $ value) as the German carrier finally revealed its highly anticipated wide body aircraft replacement order. LH signed up for 34 Boeing 777-900Xs + 25 Airbus A350-900s worth a combined total of US$ 19 billion.


The B779s will be replacing LH’s entire fleet of B744s and A346s by 2020 where as the A359s will be replacing its A343 fleet from 2016 onwards and the A333s during the next decade. The initial routes identified by LH for these aircraft are as follows:


Philippine Airlines has officially announced that it will be launching new nonstop flights to LHR-London Heathrow from its Manila hub effective 04NOV13 onwards as the carrier looks to embark on a major EU expansion as its ban has been lifted after a security/safety audit being passed. PR will be operating 5 weekly nonstop services to LHR using a B777-300ER which are expected to go daily from June 2014. Flights will be arriving into LHR at 1415 and departing back at 1705. In other EU related news, PAL confirmed that it has secured obtaining bilateral rights to fly double daily flights into Italy effective Summer 2014 i.e. daily to Rome and Milan each respectively. These two cities are expected to be operated as a triangular service 4 times per week as MNL-FCO-MXP-MNL using a B777-300ER.


With regards to its fleet expansion drive, PAL’s Chairman revealed that the carrier will be dry leasing 10 additional aircraft to cater for robust North American and European expansion. Four B773ERs + 6 A343s shall be dry leased into the fleet next year and to cater for replacements from 2020 onwards, the carrier shall be obtaining 10 A350-900s + 10 B777-900Xs.

Emirates has officially announced that it shall be launching 3 new destinations from Dec13 onwards as the carrier continues to aggressively expand its route network in under served niche markets. The main highlights are as follows:


Qatar Airways has officially announced today details of its route network expansion plans for the upcoming IATA W13 season of which the main highlights are as follows:


Delta Airlines announced that it has placed a major order with Airbus totaling US$ 6 billion for the purchase of 40 new jets from the European manufacturer. The breakdown of the order was as follows:


Etihad Airways has officially announced capacity increases to its Indian subcontinent route network for the upcoming IATA W13 season of which the main highlights are as follows:


DEL – frequencies increased from daily to double daily i.e. daily A332 + daily A320


BOM – frequencies increased from daily to double daily i.e. daily A346 + daily A320. Both the additional
DEL and BOM services depart AUH at 1530 and arrive back by 2355

China Southern Airlines has revealed that due to the ever growing popularity of its nonstop Guangzhou (CAN) – London Heathrow service, it shall be increasing its presence on this route effective 27OCT13 onwards. The current 5 weekly nonstop flights operated by a B787-800 shall be increased to a daily nonstop service using the same aircraft type offering quick connections in both directions via CAN to Australia in particular.


Ethiopian Airlines has officially announced that it is extremely pleased with the performance economics that the Boeing 787-800 has brought to the airline and has attributed this as a key aspect to their strong financial performance in 2013. As a result, ET decided to place an order for 8 additional B788s bringing the total number of units ordered to 13 by the East African airline! As far as its route network for the IATA W13 season is concerned, ET announced many changes to its medium and long haul network of which the main highlights are as follows:


DEL/HGH – frequencies reduced from 5 to 4 weekly

Alitalia has officially announced that it shall be launching adjusting its services to NRT-Tokyo for the Summer 2014 season of which the main highlights are as follows:

Air India has officially announced that if it does not hear any positive feedback from Star Alliance by the end of September 2013, it will stall all further attempts to join this alliance group and instead focus its resources to joining One World instead. The carrier is very keen to be part of a large alliance group which would enable it to realize higher yields, revenue and feeder service on board its long haul and domestic route network in particular.


Finally AI is thinking sensibly as One World is ideal for them (I am looking at this from their perspective only) as they can code share with:

India-UK is the biggest market in Europe for which a BA-AI JV partnership would be a serious threat to all the direct and in-direct carriers. On the Aussie route, AI/QF can code share on domestic Australia and trans-tasman to boost feed. On the trans-pacific front, AI via HKG or NRT can code share to YVR, LAX and SFO with JL/CX rather than spend reckless amounts of money operating its own services.


British Airways has revealed major expansion plans for its long haul route network for the IATA S14 season as the carrier looks to take opportunities in niche markets that can generate good S/F and yields at the same time. The main highlights are as follows:


AUS – new daily nonstop flights to be operated using a B787


EBB – frequencies increased from 3 to 4 weekly