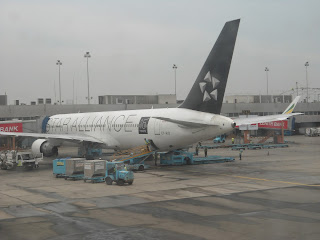 Qatar Airways has officially announced many changes to its route network for the current IATA S13 season as well its future plans of which the main highlights are as follows:

PEW - frequencies increased from 2 to 3 weekly

As far as fleet news is concerned, QR's CEO revealed that the airline is keenly interested in being a launch customer for the newly launched Boeing 777X program and would be willing to place an order for 50 aircraft comprising of both the B778X and the B779X. Along with this, Mr Baker too disclosed that QR may sign an order with Airbus at June's Paris Air Show for a dozen more Airbus A330s as a safety measure to protect its expansion plans against any further delays to the B787 and upcoming A350 delivery schedules.

QR's new PHL bound flight schedule is revealed to be departing DOH at 0100 and arriving back the next day by 0730am DOH time respectively using a B777-300ER (77W). Unfortunately, this schedule does not offer 2 way connectivity to the high volume India market in either direction which would be a vital source of feeder traffic for a new PHL service. In fact, the only Indian subcontinent routes that connect in both directions to PHL with this released schedule are CMB and KTM of which both have minimal demand on this sector. The reason for QR choosing PHL is because its now a major One World alliance hub via the take over of US Airways by American Airlines. However one feels that even though the flight schedule timings might be changed to match the current JFK service, using a 335 seater B77W for PHL is a bit too much but the B787 on the other hand is an ideally sized aircraft to use here efficiently.


Emirates has officially announced that it will be undertaking significant expansion of its route network during the current IATA S13 season as well as Winter 2013/14 of which the main highlights are as follows:


Ethiopian Airlines has officially announced that it will be increasing its services to Dubai effective 01JUN13 as the airline continues to witness very high demand on this route. Currently, ET operates 17 weekly services into DXB and these will be upgraded to triple daily nonstop flights using a B787 daily + B738 daily + B763ER daily.

Emirates surprisingly only operates a daily A332 into ADD when its direct competitor operates much more. The O&D demand between DXB and ADD can alone fill up over 60% of an additional A332 operated service.

Turkish Airlines has officially announced that it will be heavily expanding its medium and long haul network during the course of 2013 in the following manner:


Kuwait Airways has officially announced that it has received approval from the Kuwait Govt to place an order with Airbus at the upcoming Paris Air show for a major order worth over US$ 4 billion. KU confirmed that the bid from Airbus was overall US$ 280 million cheaper than Boeing's bid and the final aircraft order will consist of 25 new planes replacing entirely its current fleet of 17 aircraft. The breakdown of the 25 airplane order is for 10 A 350-900s + 15 A 320NEOs + an option for five A359s and five A320NEOs each respectively. In an effort to help it bridge the gap between now and the delivery of its new planes, Airbus included in the deal an offer to help place with KU thirteen used A320/A321s and A332/A333s.


Philippine Airlines has officially confirmed that due to poor performance of its Delhi route currently operated 3 times per week using an A320 via Bangkok, it shall be suspending all services effective 17JUN13. PAL has never been serious in giving this route a chance to succeed with its route structure, choice of aircraft and weekly frequency from the on set. Operating it in the first place via BKK was bound to fail when it has to compete with multiple daily 9W, AI, TG nonstop flights + CX daily. In addition, one does not operate such a long flight with a stop en-route using an A320 as the operating cost per seat unit is too high. In other PAL related news, it has confirmed that the 4 additional A343s that it has dry leased for its network expansion are ex Iberia (Spain) birds and these shall be used for new services to AUH, DME and IST later on in the year.


Oman Air has officially announced that it has placed an order for 3 additional Airbus A330-300s as the carrier looks to expand its long haul network in the short term with Manila and Jakarta new short listed routes. It is expected that these 3 A333s will be configured in a high density configuration seating at least 290-300 passengers versus the current premium heavy 230 seat version that it operates.


Thai Airways has officially revealed many changes to its route network for the upcoming IATA W13 season of which the main highlights are as follows:

OSL - capacity increased from daily B772ER to daily B744

AMD - frequencies increased from 2 to 4 weekly

DME - frequencies increased from 4 to 5 weekly using a B773


Lufthansa has officially announced major capacity changes to its route network for the upcoming IATA W13 season of which the main highlights are as follows:

YVR - capacity increased from daily A343 to daily A346

JNB - capacity increased from daily B744 to daily A380