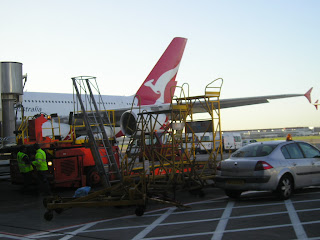 Ethiopian Airlines has officially revealed that it shall be embarking on a massive expansion of its Southeast Asian route network from 01JUN13 as the carrier looks to further consolidate its presence and brand as being the carrier of choice for traders flying between Africa and the Orient.


Garuda Indonesia has officially announced that it will be launching a new European long haul route effective Oct 1st 2013 which is LGW-London Gatwick. GA shall be operating this new service 6 times per week nonstop from its CGK hub base using its brand new Boeing 777-300ERs. As of this moment, the airline has not released a firm flight schedule but its expected to be similar to its current AMS flights. The main target markets for GA on the LGW sector include O&D to Indonesia, holiday traffic bound to Bali and transfer traffic via CGK bound to Australia, SIN, KUL, MNL and AKL.


Cathay Pacific's new CEO has officially revealed that the airline is once again seriously evaluating the need of ordering VLA jets i.e. B747-800 and Airbus A380 as it deals with future slot constraints at its main HKG airport hub as well as those in USA and LHR in particular.

Keeping in mind that CXs current B744s seat 359 pax in a 4 class premium configuration, the B748 if ordered by CX would seat in the same layout a maximum of 410 seats aka 14% capacity increase which isnt much. However an A380 in 4 classes can easily accommodate 480 passengers (Qantas like) which provides a 30% capacity increase versus CX's B744s and this is what they are after I reckon especially since it will enable more F/J class seats being fitted in resulting in higher yields en-route. CX's B744s currently have 9F and 46J and on the A380 it can easily be 12F + 66J if required.

The only area where the B748i holds an advantage over the A380 is the amount of cargo it can carry in its belly, but with such a large dedicated freighter fleet along with numerous B77Ws/A330s and A350s on order, if an A380 order does happen, the balance freight can easily be accommodated elsewhere on other flights operated by a different aircraft.

Lufthansa has officially revealed that it shall be reducing capacity significantly to IKA-Tehran, Iran for the entire IATA S13 season in spite of it being the only mainland European airline operating nonstop to Iran. Previously as per norm, LH operates a daily 306 seater A 340-600 on the IKA-FRA route but in S13, this shall be reduced to a daily A340-300 seating 241 passengers only i.e. 21% drop in capacity


Alitalia has officially announced that due to high losses and low yields, it shall be suspending its long haul serves to PEK-Beijing, China effective 06MAR 2013. The carrier is once again in severe financial state which has prompted this move to take place. AZ currently operates 4 times per week from its Rome base to Beijing on a nonstop basis using an A330-200.


American Airlines has officially announced that it has exercised an option to purchase 5 additional Boeing 777-300ERs from the U.S. airplane company as the carrier embarks on a rapid expansion of its long haul network as well as replacing high demand B772ER operated flights with B773ERs in order to boost revenues.

If AA has planned for its future a fleet of around 40 B773ERs, it might want to consider having 10 of these aircraft configured in a high density 2 class configuration which would seat 40 business and 334 in economy class. This aircraft it can use profitably year round on routes that witness consistent high volume and no first class demand as well as on long haul flights to SE Asia where the flexibility of having an additional 120 seats in economy class will come in handy big time and improve the overall economics of the route. A high density 374 seater B773ER would also be ideal for AA if it ever considered resuming nonstop services to DEL from its ORD hub as well as peak summer flying from USA to Europe.

Air France has officially announced that it will be significantly increasing capacity on one of its popular SE Asian routes i.e. SGN-Ho Chi Minh City from the on set of the IATA S13 season. Currently, AF operates 5 times per week to SGN using a B772ER but the flight gets tagged on towards PNH-Phnom Penh, Cambodia. However effective 31MAR, all AF flights to SGN shall end up being nonstop terminator services operated 4 times per week but using a high density larger Boeing 777-300ER aircraft.

Above mentioned flight compliments the existing daily UAL IAD-BRU service which is operated with a B767-400ER which departs BRU at noon.

Comments:
Arrival into IAD is fine as it connects very well to UA's domestic 2150-2230 departure hub wave bank. BRU-IAD will have a lot of O&D traffic with people wanting to work a full or half day in BRU itself before heading out to DC.


ALC (Aircraft Leasing Company) has officially announced placing a multi billion order order with Airbus for a mixture of A350 and A320NEO family aircraft. The order breakdown is as follows:


Qantas of Australia has officially announced a major restructuring of its Asian route network as the carrier looks to better serve markets after its recently struck alliance with Emirates. The main highlights are as follows: