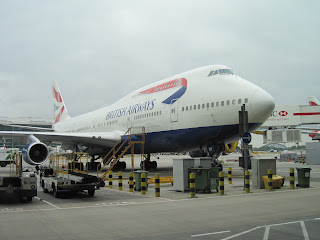 British Airways has officially revealed that it shall be reducing capacity on its London-Delhi route from Feb 1st onwards as the carrier takes delivery of more B 773ERs. For the IATA Winter 2010 season, it is operating a double daily B 744 service to DEL, however from Feb 1st, it gets reduced to a daily B 773ER + daily B 744. In addition, BA too confirmed that its flights to North America will see capacity changes for the Winter 2010 season in the following manner:


Virgin Atlantic has officially announced that it will be increasing capacity to Delhi, India from its London Heathrow base from the on set of the Summer 2011 season i.e. March 27th. Currently, it operates a daily nonstop service using an Airbus a 340-300 however from March 27th, a larger Airbus A 340-600 shall be used by the carrier to fly the route on a daily basis.


Air India has officially announced that it will be rescheduling its operations to Toronto with the much anticipated daily nonstop flight being announced from Delhi from Nov 1st 2010. AI will be using a Boeing 777-300ER for this dedicated flight with a same flight number to ATQ-Amritsar. However, the DEL-ATQ sector will be operated using an A 320/321. The flight schedule is as follows: Days of operation - DAILY AI 187 Dep DEL 0125 Arr YYZ 0645 AI 188 Dep YYZ 1035 Arr DEL 1125+1

Other long haul changes announced by the airline to take effect from Nov 1st are as follows:

DEL/ORD – daily nonstop flights to be operated using a B 77L.

BOM/EWR - daily nonstop flights to be operated using a B 77L.

DEL/FRA – daily ‘day light’ terminator flight to be operated using a B 77L. This will be the only India-FRA service operated by the carrier as it is abolishing its scissors hub at FRA airport from Oct 31st.

Singapore Airlines has officially revealed many capacity changes to its medium and long haul route network for the IATA Winter 2010 season. The main highlights are as follows:

KIX - frequencies increased from daily to 10 weekly nonstop flights using an A 333 for all flights.

DME/IAH - frequencies increased from 5 weekly to daily flights using a B 773ER.


Qatar Airways has officially revealed that it will be reducing capacity on its Singapore-Bali route from Jan 1st 2011 onwards. Currently, QR operates this service on a daily basis using a 335 seater B 777-300ER, however from the new year it will be using a smaller 259 seater B 777-200LR three times per week along side the B 773ER four times per week. This translates into a 24% reduction by QR on this sector.


KLM has confirmed that it shall be implementing few capacity changes for its long haul network for the Summer 2011 season. The main highlights are as follows:


Oman Air has officially announced few changes to its Indian subcontinent network for the IATA Winter 2010 season. Services to Bangalore are being increased from 5 to 6 weekly nonstop flights where as flights to Chittagong are also being increased from 5 weekly to daily nonstop flights. BLR will be served with a B 737-700 where as CGP is operated with a B 738.


Fly Dubai has officially announced that it will be increasing its flights to Bahrain and Muscat from Nov 1st 2010 onwards. Both cities will see frequencies lifted from double daily to triple daily flights using a 189 seater B 738X.


Spice Jet under a new management team has confirmed to the Indian media that it shall be ordering 30 new Boeing 737-800s which shall be delivered to the carrier from 2014 onwards. This will make the total B 738 fleet number 58 aircraft.


Finnair has officially announced that it shall be leasing into its fleet 2 used Airbus A 340-300s from April 2011 as the carrier looks to further expand its highly successful long haul services to Southeast Asia from its HEL hub. The aircraft will come from ILFC and are expected to be ex Virgin Atlantic aircraft as the latter is receiving few A 333s from next summer which are replacing the A 343s on trans-atlantic services.
Posted by behramjee at 4:46 PM