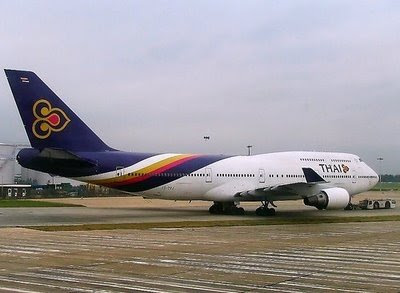 Thai Airways has confirmed that as a result of it experiencing a combined loss of USD 120 million its nonstop BKK-JFK and BKK-LAX flights, it will be suspending these flights gradually. JFK will be suspended from July 1st, where nonstop LAX service ends in Oct. LAX though will continue to be served via Osaka with a reduced 5 weekly frequency using a B 772ER. As a result of this, TG will be selling its fleet of 4 Airbus A 340-500s by this winter to interested bidders.
Comments:
Its amazing that after realizing that USD 120 million has been lost flying these 2 routes that they decide to suspend it. When the figure hit USD 30-40 million, that is when the plug should have been pulled. Their attempt to copy SQ here totally back fired on them as they fail to realize that SIN is a business/financial hub of SE Asia and SQ has the brand name recognition to make people pay a premium to fly it rather than TG. Another problem for TG was their pricing.
Even though they offered a premium nonstop product, their fares in business and economy class were the cheapest on the JFK-BKK route which should not have been the case as they needed to charge a higher fare especially in J class for the convenient product that they were offering.
Posted by behramjee at 3:24 PM